ABOVE  —  artist’s impression of orbits of Jupiter’s 67 moons. Jupiter has been referred to as a mini Solar system because of the thousands of small bodies under its gravity control.

Dynamic stability of the Solar system

In 1885, King Oscar II of Sweden and Norway offered a prize to anyone who could discover what is responsible for the stability of the Solar system. He wanted to know why it didn’t just fly apart. French mathematician and physicist Henri Poincare won the prize, not by answering the King’s question, but by demonstrating that the stability cannot be mathematically established. He showed that we can say things about bodies rotating about one another and describe and predict their motion, but that the mathematics ultimately suggests chaotic behavior, or a sensitivity to initial conditions. This so-called sensitivity to initial conditions was publicized in the 1960s and ’70s by mathematician Edward Lorenz, who called it the butterfly effect. It is also known as chaos theory. — The Discovery of SuperWaves

Over the last two decades, there has come about a recognition that chaotic dynamics are pervasive in the solar system. We now understand that the orbits of small members of the solar system—asteroids, comets, and interplanetary dust—are chaotic and undergo large changes on geological time scales. Are the major planets’ orbits also chaotic? The answer is not straightforward, and the subtleties have prompted new questions. Most uncomfortably, the proof that such a scheme “works” for arbitrarily long times has remained elusive. Do the perturbations cause only small changes in the present nearly circular, nearly coplanar orbits of the planets, or might they add up so much over the great age of the solar system that the orbits change greatly, in the past, or future? — Chaos and stability of the solar system

Due to the chaotic nature of the Solar System, the question of its long-term stability can only be answered in a statistical sense. Destabilization of the inner planets, leading to close encounters and/or collisions can be initiated through a large increase in Mercury’s eccentricity. This poses a dilemma as the physical evolution of the real system – and its probabilistic behavior – cannot depend on the coordinate system or numerical algorithm chosen to describe it. — Dynamic stability of the Solar System

HAVE YOU EVER PONDERED DEEPLY ENOUGH WHY THE SOLAR SYSTEM HAS BEEN SO PERFECTLY STABLE OVER SUCH A LONG TIME?

HAVE WE EVER OBSERVED ANY DIRECT OR INDIRECT EFFECTS RESULTING FROM ANY POTENTIAL SOLAR SYSTEM’S INSTABILITIES, LIKE FOR EXAMPLE:

IS THIS PERFECT LONG-TERM STABILITY REALLY THE EXCLUSIVE RESULT OF A FRAGILE BALANCE BETWEEN GRAVITATIONAL ATTRACTIONS AND CENTRIPETAL FORCES AMONG THE SUN, THE 8 PLANETS, AND OVER 170 MOONS, NOT INCLUDING PLUTO, ITS 5 MOONS, AND THE PLANET NINE so massive that it tilts the entire Solar system by 6 degrees?

COULD THAT HYPOTHESIS OF FRAGILE BALANCE BETWEEN GRAVITATIONAL ATTRACTIONS AND CENTRIPETAL FORCES SOMEHOW BE SUBJECTED TO EMPIRICAL VERIFICATION, OR FALSIFICATION? WHAT WOULD IT TAKE FOR ANY ONE OF THE ABOVE 4 SPECTACULAR INSTABILITIES TO OCCUR IN THE SOLAR SYSTEM?

Considering that the age of the Solar system (derived from the study of meteorites which are thought to be the oldest accessible material around) is estimated to be close to 5 billion years, have the angular velocities of all the planets and moons been slowing down? Have they been slowing down at the same rate, or at different rates? In either case, how long will it take before any one of the above 4 spectacular instabilities is going to finally occur?

Well, I will not hold by breath, and if none of the above 4 spectacular instabilities had ever happened even once, not to mention that all of them could have happened more than once, then it would follow that the present Solar system stability hypothesis of FRAGILE BALANCE BETWEEN GRAVITATIONAL ATTRACTIONS AND CENTRIPETAL FORCES is correct in small part only.

If so, then how would moons form around planets?

Why Saturn’s rings are not forming into a moon?

Why the asteroid belt is not forming into a planet? 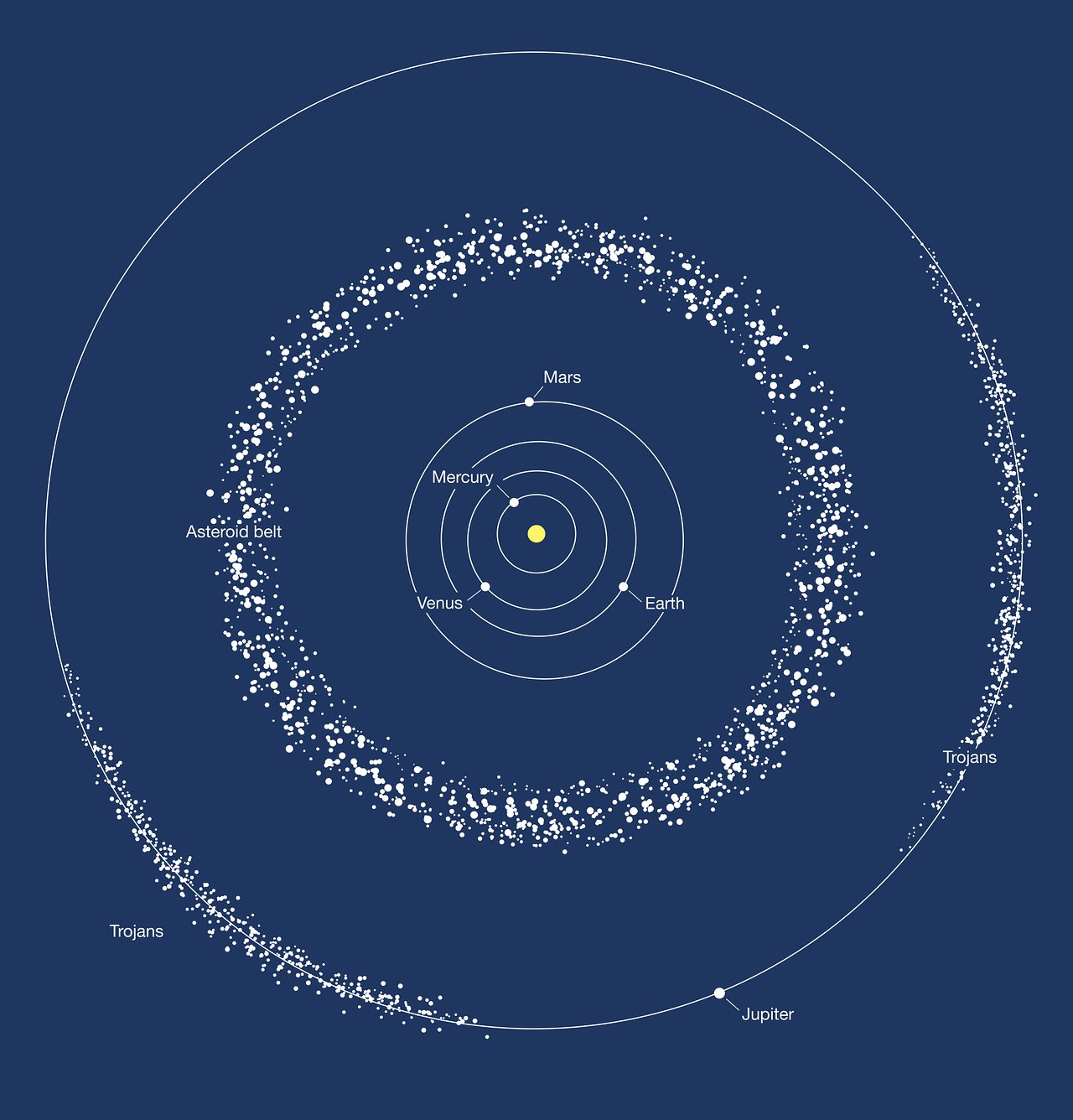 “ Scientific discovery consists of seeing what everybody has seen, and thinking what nobody else has thought. Scientific discovery must be, by definition, at variance with existing knowledge. During my lifetime, I made two. Both were rejected offhand by the Popes of that field of science.”

In the following video, the magnetic device composed of one big central magnet, and six smaller “flipped” (or “inverted”) magnets is clearly capable of magnetic attraction and repulsion at the same time. Just because the large magnet attracts, and small magnets repel, it does not follow that these two opposing effects cancel each other out and become nonexistent. From this stems the unexpected and particularly important “side-effect”  —  STABILITY:

Let’s imagine what could happen between the Sun and the Earth, when Sun is gravitationally attracting Earth, but Earth is both gravitationaly attracting and repelling the Sun at the same time. Would it be possible that Earth could have a stable orbit around the Sun as a result of such “side-effect” ?

This could, in principle, explain the stability of the entire Solar system, including all the moons of all the planets.

Detailed explanation of how Earth is both gravitationaly attracting and repelling the Sun at the same time is presented in the middle of this page:

The hypothesis that the Sun may carry a negative electric charge was proposed by Australian physicist, Prof. V.A. Bailey at first in 1960 for the explanation of the maximum energy found for a primary cosmic ray particle and other astronomical phenomena. According to the electrogravitic theory by B.V. Ivanov, it can be seen that stars, like the Sun, can have their mass generated by its electric charge:

Patrick Blackett (1897–1974) was a prominent British astronomer who noticed a correlation between the rotation rates, the gravitational fields, and the magnetic fields of the Sun, Earth, and Jupiter. In a paper in the British journal Nature, Blackett presented an empirical equation relating these quantities. He went on to suggest that there might be a previously unsuspected principle of nature by which magnetic fields are generated directly in massive electrically neutral rotating bodies like the Earth. A few years later, a science-fact article in John W. Campbell’s Astounding Science Fiction described Blackett’s work as the possible discovery of a new law of nature. The author of that article suggested that if gravity and spin could produce magnetism, then spin and magnetism might produce gravity, and even antigravity.

Gravitomagnetism is produced by stars and planets when they spin. “It’s similar in form to the magnetic field produced by a spinning ball of charge,” explains physicist Clifford Will of Washington University (St. Louis). Replace charge with mass, and magnetism becomes gravitomagnetism.

Written out in full glory, the equations of General Relativity are intensely complicated. Indeed, they have been solved in only a few special cases. One of them is the case of weak gravity, like we experience here on Earth.

In the “weak field limit,” Einstein’s equations reduce to a form remarkably like Maxwell’s equations of electromagnetism. Terms appear that are analogous to the electric field caused by charges and the magnetic field produced by the flow of charge. The “electric terms” correspond simply to the gravity that keeps our feet on the ground. The “magnetic terms” are wholly unfamiliar; we don’t sense them in everyday life.

The great physicist, father of quantum mechanics, Niels Bohr proposed to model the atom after the Solar system. I propose to do it the other way around. It is not to say that the Solar system is exactly like an atom, but that it is structured according to similar principles.